Working with fractions is notoriously something that teachers complain about when it comes to pupils' understanding and ability to manipulate. As a result it often seems to me that working with fractions is a place where even the best maths teachers can often fall back into what Skemp would call 'instrumental understanding'; pupils mechanically following procedures rather than applying any understanding of the relationships between the different parts of the process or between the question and the result.

This was brought to mind for me recently when I saw the question below mixed into a group of questions about comparing fractions:

From the rest of the questions listed it was quite clear that the intention would be that pupils write the second fraction as a fraction of 30 so that the comparison between the numerators would yield clearly that the first fractions is bigger than the second. Which of course is completely apparent because the first is more than ½ and the second less than ½. Any halfway competent mathematician wouldn't even bother equating the denominators, and this is the sort of thing I would want to highlight to pupils in order to try and develop their relational understanding.

The process of finding common denominators for comparing, adding and subtracting fractions is one that can easily become automatic for pupils, and I would argue that if pupils are to really understand fractions then they need to be able to take a more discriminatory approach. The following are all examples of questions that pupils could tackle without finding common denominators: 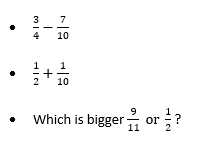 I would argue that the first and second points are more easily done by converting to decimals than fractions (which people may or may not agree with), and that the last one certainly doesn't require a common denominator; the first is greater than ½ whilst the second is equal to ½.

So if you are truly committed to developing pupils' relational understanding of fractions then the next time you look at the sorts of comparisons or calculations that often benefit from converting into equivalent fractions with common denominators, it might be worth throwing in some examples and questions of calculations where this is a method of last resort.