Yesterday I had the great opportunity to present the ResearchEd National Conference at Harris Chobham Academy in Stratford, London. I would like to thank all those people who attended my talk. The link below will give access to the slides:

Posted by Peter Mattock at 03:48 No comments: 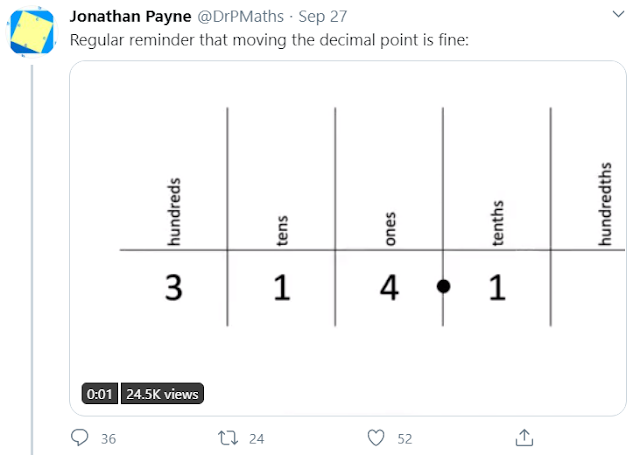 Posted by Peter Mattock at 11:34 No comments:

What is a valid mock?

So Ofqual have released (on a Saturday) the criteria for deciding what a "valid mock" is for the basis of appealing a pupil's A-Level, AS-Level or GCSE grades. If you haven't yet seen them, the criteria can be found here: https://www.gov.uk/government/news/appeals-based-on-mock-exams

One of the criteria in particular caught my eye:

I remember in 2015, when the new GCSE in Maths started, I made myself very familiar with the approach that exam boards take to set their boundaries. It is quite involved to say the least, using national data on prior attainment of the cohort, previous performances of other cohorts, all sorts of data. I doubt any individual school or trust could match those standard - I remember the laughable outcomes when PiXL first tried and the flack they got for the grade boundaries they came up with. My blog on our process at the time is still my most read blog: https://educatingmrmattock.blogspot.com/2016/11/new-gcse-grade-boundaries-my-thoughts.html
Which of course presents a problem. For a mock exam to be graded in line with the exam board's examination standard, I can't see any alternative but to have used the grade boundaries provided by the board, on the same paper(s) provided by the board. Anything else simply doesn't (in reality) live up to examination standards. No exam board would arbitrarily reduce boundaries to reflect that pupils haven't completed a course, which is a common practice in schools. No exam board would simply use the average of a set of grade boundaries, or apply one years grade boundaries to a different set of papers. Any school or Trust who has done this can't sign the form to say their exam was graded in line with the examination standard provided by their exam board. Nor can those schools that use papers they have created themselves, or those that use practice papers that don't have grade boundaries provided.
In my own department we use a practice paper that comes from the exam board, but does not come with boundaries. We set initial boundaries for that years ago, before the first ever exams on the new GCSE and so before their were any past papers in existence. We sat the exam at a similar time to some other local schools, pooled our results together, and applied a similar process that exam boards were applying for their first set of new GCSE papers. We then compared the results that pupils eventually got with their mock exam results, and adjusted the boundaries for the following year. We used the same papers for mocks every year since, continuously refining the grade boundaries as we got more real results to compare to. This is about the most robust system any school could implement to grading, but even this falls short of examination standards.
Of course, the head of centre only needs to sign a form saying "I confirm this mock exam meets the criteria". No one is going to check. No one is going to ask how they know the boundaries meet the criteria. Unless this is going to be used as a "get-out" clause to deny large numbers of appeals, then I doubt this line will end up meaning much. But it should, and that is the shame of it all.

Posted by Peter Mattock at 09:30 No comments:

Email ThisBlogThis!Share to TwitterShare to FacebookShare to Pinterest
Labels: Leadership and Management, Response to publications

Maths as an option?

This tweet caused quite a discussion recently on Twitter.
My answer to this was quite to the point.
However, I was asked to elaborate as to why, and I thought it would make more sense to write it in a blog rather than as a series of tweets that might (would) turn into an overlong thread.
My reasons for opposing Hannah's proposition fall broadly into three camps:
1) There is so much more to maths than what you can do with it (its functionality).
2) The central place that mathematical knowledge serves in our society and history.
3) The inherent biases that exist within education and the minds of maths teachers.
Regular readers of my blog/listeners to my various presentations/interviews will know that I am a big and loud (in both senses) proponent of the view of maths as a collection of connected ideas, and that our job as maths teachers is to support pupils in reaching an understanding of these ideas and how they are connected. This doesn't necessarily mean a "guide at the side" approach to teaching - indeed a wise sage that knows exactly what things to say, questions to ask, examples and representations to show is often exactly what it needed to support in gaining wisdom. What this does mean is a need for teachers to really have a depth of knowledge about each mathematical idea, and its place in the larger concept.
Let us take a couple of examples, in fact the ones mentioned in the thread, namely constructions and histograms. Both are touted as superfluous to requirements in a "modern" mathematical education. However, constructions are intricately and inexorably tied to wider knowledge and understanding of 2-D shapes and their properties. This is often not made explicit because, as Dani Quinn (@danicquinn on Twitter) pointed out, constructions is very often approached as a series of "do this, do that" steps with no effort made to tie it to the larger concept. Getting specific, consider trying to create the perpendicular bisector of a line segment. But rather than thinking about the steps required, think instead about which 2-D shapes have the property that at least one of the diagonals perpendicularly bisects another. The list you might have come up with is:
Now think again about the standard image for a perpendicular bisector: 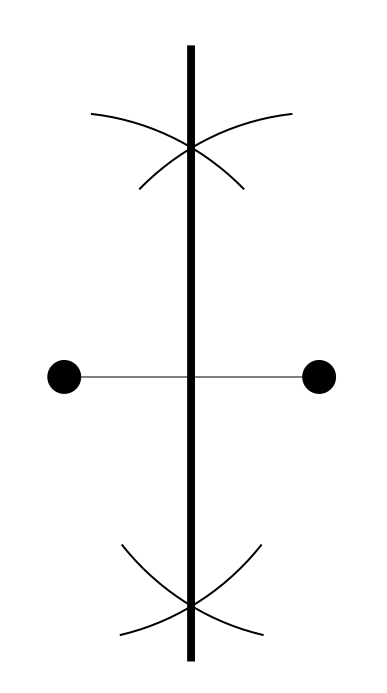