My esteemed colleague Mark Horley (@mhorley) wrote an excellent blog recently about the balance between the need for understanding when teaching simultaneous equations balanced against ensuring procedures are straightforward enough to support pupils ability to follow (read it here). Reading his reflections led me to reflect on my own approach to simultaneous equations, as well as others I have previously seen, and one that occurred to me literally as I was thinking about them. This blog is designed to act as a summary and chart my journey through the teaching of this topic. 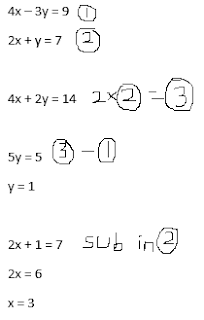 Elimination: This is probably the first method I used, and is definitely the sort of approach I was taught at school. Very much a process driven method, I can't remember understanding much about the algebra beyond the idea that I was trying to get rid of one variable so that I could find the other. I find that the subtraction often causes problems (which is partly why Mark's idea of multiplying by -2 instead of 2 is very interesting) and of course the method doesn't generalise well to non-linear equations. I can see this being a popular approach for those people teaching simultaneous equations in Foundation tier. 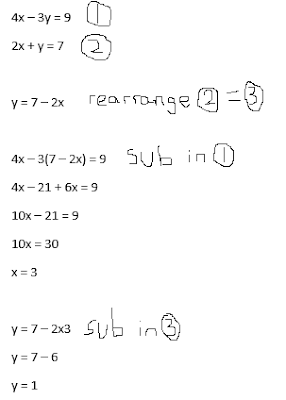 Substitution: Another one from school,
this was the alternative I was taught to
elimination, which was mainly because it
was necessary to solve non-linear
simultaneous equations. I can't remember
it being the method of choice for myself
or any of my classmates, and that is
certainly borne out with my experience of
using it with any other than the highest
attaining pupils. 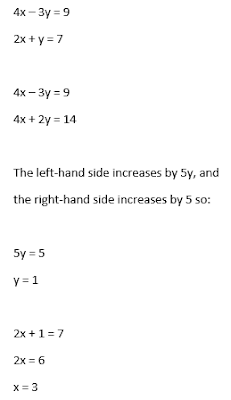 Comparison: Similar to elimination, but for me less
process driven and more focused on understanding the
relationship between the two different equations. This
removes the difficulty around dealing with subtracting
negatives, and allows for the exploration of which
comparisons are useful and which aren't, so it is a little
less 'all or nothing' than the process drive elimination
approach. It also copes nicely with having variables with
coefficients that are the additive inverse of each other, for
example in the pair of equations above if instead of the
approach outlined we multiply the second equation by 3
and get:

This is the approach I used when recapping simultaneous
equations with my pupils in Year 11 and they certainly
took to it a lot better than the elimination or substitution
that had used with them the previous year.

Transformation: This approach is the
one I have very recently considered, but
not yet tried. The general idea is that you
isolate one of the variables, and then look
at how you can transform that variable in
one of the equations into the other. The
same transformation applied to the other
side of the equation then gives a solvable
equation. Although the equation may be
slightly harder to solve at first, I do believe
this approach has merit. I would suggest
that this approach develops pupils'
appreciation of the algebra and the
relationships between the different
equations in a similar way to the
comparison approach above. I can also see
this approach working for non-linear
equations, like the one below: 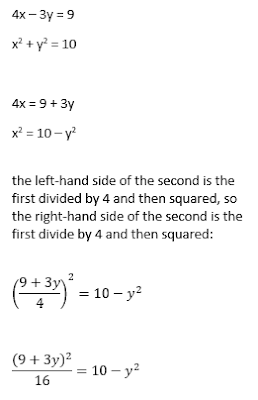 I will almost certainly give this approach a try when I next teach simultaneous equations - when I do I will try and blog the results!
Posted by Peter Mattock at 12:28