Gradient of lines - a new approach

Recently I have been teaching the idea of gradient to Year 8, and I decided to approach things quite differently. In the past I would move quite quickly through the ideas of gradient as a measure of slope, finding gradients of lines plotted on a coordinate axes, then linking gradient and intercept to the equation of a line. From my experience this is a fairly standard approach and one that a lot of teachers use. My problem is that typically not too many pupils actually get success from this approach. It occurred to me that I could do a lot more to secure the concept of gradient, and I decided to spend significantly more time than normal doing this, with some surprising results.

The first thing I did was to talk about different ways of measuring slope. Normally I would only focus on the approach I was interested in, but this time I talked about angles to the horizontal and the tangent function. I talked about road signs using gradients as ratios or percentages. Then I talked about gradient measure on a square grid. I have used different ways of defining gradient throughout my career, starting with the standard "change in y over change in x" before I realised this definition was more about how to calculate gradient on a axes rather than what gradient actually is. I played around defining gradient using ratios and writing in the form 1:n, which had some success for a while, but became cumbersome as ideas became more complex. The definition I have settled on for now is "the vertical change for a positive unit horizontal change", or as I paraphrased for my pupils "how many squares up for one square right?" The reason I like this definition is that it incorporates the ratio idea, works for square grids that may not include a coordinate axes, and I can see how it will help highlight gradient as a rate of change later on.

From here we spent quite a number of lessons learning and practising the act of drawing gradients. We started with positive whole number gradients, drawing one short line, and then one line longer, so that we got pictures looking a little like this: 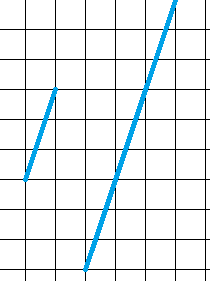 What was really interesting at this point was dealing with the early misconception that the gradient of the right hand line was larger than the left, even though pupils had watched me draw both in precisely the same way. There was an idea, hard to shake, that a longer line meant a steeper gradient; I suspect because the focus was very much on 'how many squares up' the line was going. This did give me the opportunity to reinforce the importance of the single square right; this is an idea we had to keep coming back to throughout the topic.

With integer gradients well embedded, attention was then turned to unit fractions. There was a great deal of discussion about drawing 'a third of a square up'  for a single square right. The beauty of our definition of gradient here was that it allowed us to use a proportional argument to build up to the idea of drawing 3 squares right to go single square up; if one square right takes you a third of a square up, then 2 right will take you two-thirds up and 3 right will take you three-thirds (i.e. one whole). What was very quickly showed up here was a lack of security with the concept of fractions and counting in fractions (this was Year 8 low prior attainers) and so I am sure that some pupils then started adopting this as a procedure. We were then able to build up to non-unit fractions, both positive and negative, all the time drawing one line short, and then at least one line longer (in preparation for the time where we would draw lines that span a whole coordinate axis).

It was only after we had really secured the drawing of gradients of all types that we moved onto finding gradients of pre-drawn lines, which was simply then the reverse process, i.e. how many squares up/down for one square right? Again a nice proportional argument was used when the gradient was fractional. By the end of this there were pupils in the bottom set of Year 8 able to find and draw gradients like one and three-fifths.

The next part of the sequence wasn't nearly as effective. I went back to the idea of linking gradient and intercept to equations, and although pupils were identifying gradients with ease, and drawing gradients with ease, the extra bits of y-intercept and algebraic equations wasn't so thoroughly explored and the kids struggled. I almost feel like I would have liked to have left this and then come back to it as an application of the work we had done on gradient later in the year; when I design my own mastery scheme I will almost certainly separate these parts and deal with gradient as a concept on its own before looking at algebra applied to straight line geometry at a different point in the scheme.

My advice to anyone dealing with gradient would be to spend time really exploring this properly and not just rushing to using it to define/draw lines.
Posted by Peter Mattock at 06:36