Look familiar? This question caused massive controversy when it was released in summer 2015 as it was seen as too much like things to come - many felt that it was more like the sort of question we might expect in 2017 when the new '1-9' GCSE is first examined and had no place in the current GCSE. Whether you believe this or not, the point is clear that pupils need to understand the ideas of probability and apply them outside the realms of numerical chance. With that in mind I thought I would share some ideas about developing probability without giving (too many) values.

I am surprised we do not see more links between probability and proportion as ultimately probability is a proportional idea, the chance of something happening is measured as a proportion of the things that are possible or as a proportion of a number of trials in an experiment. In the past proportionality has generally be pretty limited to calculating an expected number of trials that would satisfy the given condition. I think it is clear though that with anything up to 25% of the new GCSE paper content being linked to ratio and proportion I think that we will see a lot more questions linking these two topics in the future. Questions like the ones below could become much more common:

Hannah and her sweets have given us a pretty clear indication that this will be a rich source of links for examiners to mine and again it makes perfect sense: if you understand the ideas of probability and algebraic expressions/equations then there should be no reason why you cant apply the two ideas together. We have also seen in the SAMs at least one question that has purely algebraic expressions inside a Venn diagram linked to probability for pupils to work with and I am sure we will see more examples in the coming years.
1) 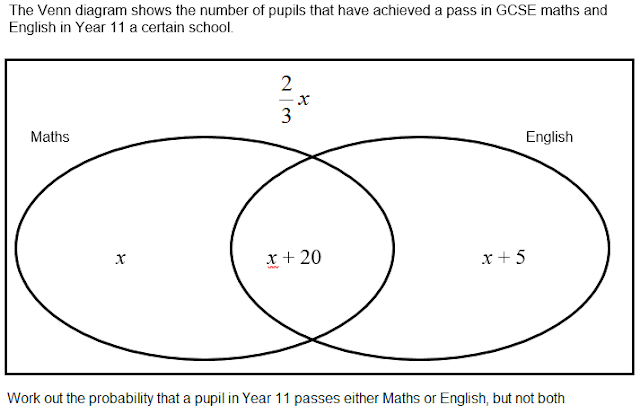 It strikes me that replacing lots of the numbers in current probability questions with letters will generate questions of this type, and so would be well worth some time in faculty meetings designing.

No doubt at this point people will be thinking "yes but probability and statistics will only be 15% or so of the content..." and of course they are right, but don't forget that 15% of 240 marks is a good 36 marks, so there is plenty of space for one of two questions of this type to creep in, particularly as they can also count towards the 20%  to 30% Algebra content or 25% to 20% Ratio content so I would suggest it is well worth building questions like this into your GCSE schemes.