Parallel lines are the same length and other such nonsense!

Recently we have been talking about the messages and misconceptions we convey without meaning to. A colleague of mine (not in my school) put me onto one - when we draw parallel lines we nearly always draw them the same length. A quick google image search suggests that this is not just the maths teachers I know: 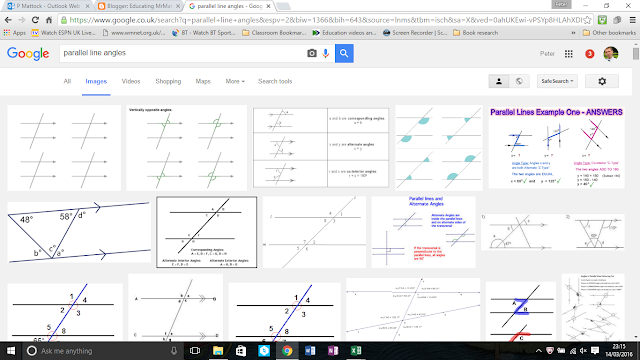 We can see that whilst most of the pictures do show horizontal or vertical lines, all of the pictures show parallel lines the same length. Whilst some might say that this isn't really significant, I wonder if it is not something we should be aware of anyway in terms of forcing ourselves to think about the implicit messages that we give to pupils alongside the explicit content or skills we are trying to teach.

Another example that we have come across recently is that the equation 3x = 4 has no solutions because "three doesn't go into four". There was some debate as to whether this shows a general lack of understanding of division, or is a function of the fact that most equations we being to show pupils in there initial introduction to equation solving have whole number solutions. On the subject have you ever noticed that pupils struggle a lot more with equations of the form

compared to 4x - 3 = 5? Could it be that on balance they see many more equations of the second type than the first?

Some other areas of discussion:

There are lots of other patterns you can find in textbooks and other materials that teachers naturally draw on for their own examples - so my suggestion is to really think about the breadth of examples that are possible with the maths pupils are learning; and not just the typical examples you may have seen before.