Introducing Loci - Cones and chalk outside!

I was very fortunate this week that the recent wet and nasty weather that had permeated the East Midlands following our lovely September weather cleared away on Thursday to leave a dry (if somewhat crisp) day as it allowed me to run one of my favourite lessons - outdoor loci.

Having grouped the pupils accordingly it was off out on to the hard standing outside the main school building with some tape measures, some small cones (borrowed from PE) and some bits of chalk to start building and drawing loci. 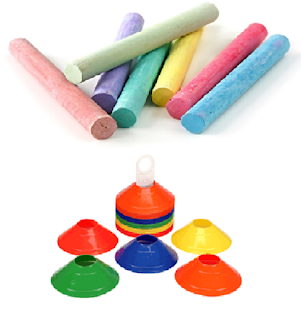 I set up the 7 standard stations for loci - a point, two points, a line, 2 lines at an angle, 2 parallel lines, a point and a line, and a corner (we actually used the corner of the building for this). Each group was assigned a picture and had to use the chalk and/or cones to build the given "locus" - i.e. either show all the points at a fixed distance (I told them 1 metre) or equidistant as appropriate.They had about 15 to 20 minutes or so to build their picture (an interesting mix of chalk and cones used in some places) and then we came back together and toured each group's diagram, with the group explaining what they had (with varying degrees of success) drawn. All of the groups could at least articulate what they were trying to create, even though in some cases the accuracy suffered through working on concrete, and so no learning was lost here.

Having studied construction techniques in a previous lesson, and so with pupils already familiar with terminology like "perpendicular" and "angle bisector" we were able to tease out where these pictures were appearing, as well as some interesting ones like the parabola from the point and the line (we had studied sequences, including quadratic sequences in the previous topic, and so was able to allude to the link even if I didn't want to explore it in any great depth). What was great though is then in today's lesson, when we were then constructing loci using the standard techniques, the lesson was much smoother because there was already an understanding of the sorts of pictures we were expecting to see. This meant the focus could be entirely on interpreting the instructions and then constructing the appropriate shape - without the usual having to work out what the shape looked like first.

So in summary, why not do something different the next time you teach loci? Not only will it help when it comes to the actual construction skills, it will also show the kids that different side of maths that is not just done with pens and paper.