A little while ago I blogged about an experience I had had with Year 7 top set on forming and solving equations, particularly with regards this question:

ABC is an isosceles triangle with AB = AC. Find the value of the angle marked y in the triangle. 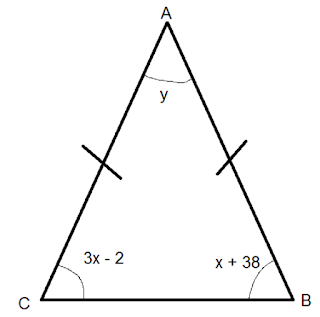 Whilst thinking again today I suddenly had one of those little inspiration moments that set the brain a-buzz; what happens if I swap the y to be one of the isosceles triangles base angles? I quickly realised that this would lead to a much more involved simultaneous equation pair (technically the above question is also a pair of 'simultaneous' equations, but I don't really think anyone would treat it as such). This led me to design this question:

ABC is an isosceles triangle with AB = AC. Find the values of x and y. 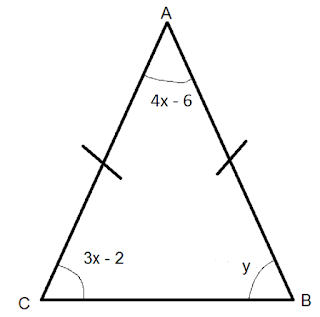 I really like this question as it requires a nice combination of the angles properties of all triangles (i.e. that they total 180 degrees) with the specific angle properties of an isosceles triangle (i.e. the 'base' angles being equal). I feel like it would generate some really good discussion between/with pupils about where the information to solve the problem is going to come from and would help reinforce the need for two equations in x and y. There is also a nice conversation to come out of this about which approach to simultaneous equation solving; I feel that substitution is a more efficient approach in this case than elimination. With the new GCSE examination in England having a much greater focus on communicating and reasoning mathematically, I can see questions like this being much more prominent in the years to come. This question is definitely going into my simultaneous equations unit for higher, and I would love for others that have current year 10s and 11s (my school has Year 10 for the first time next year) to use it and give me any feedback from how their pupils work with it. I am now going to look at other shapes and design some more, and would love to receive some from others.

Just for anyone struggling, my solution to the problem is set out below: