With the advent of all GCSE pupils needing to know exact trig values for 30, 45 and 60 as well as 0 and 90, a lot of people have been searching for a way to make these accessible for Foundation pupils. This came to the fore again on Wednesday prompted by this tweet from Drew Foster: 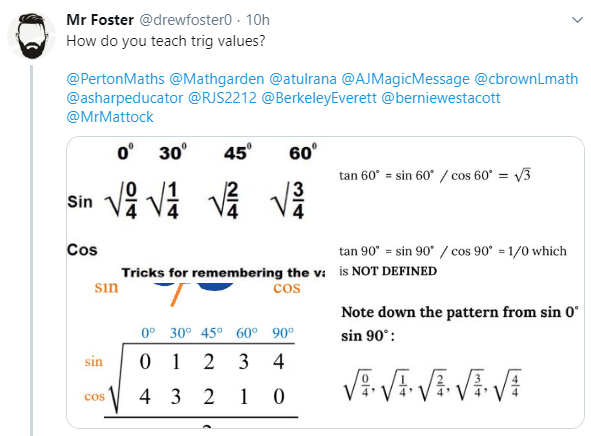 Now this is interesting for me. I have typically taught this using the two standard triangles: 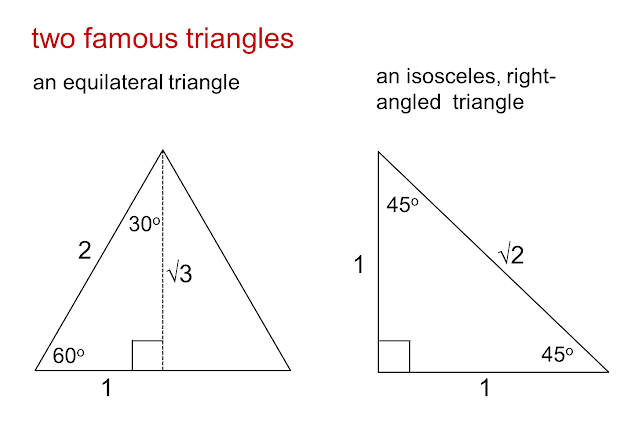 However, I have been know to resort to some of the "tricks" contained in the original tweet, particularly for Foundation pupils or pupils closer to the exams. I know that understanding on its own is not enough to lead to memory, and so I justified this in terms of helping remember. This was particularly needed because, even with kids who understood how the triangles worked, is that they often forgot to draw the triangles, or what the triangles looked like. Instead, they would supplement my teaching by endlessly drilling themselves on the values, usually found in table form.

Now I don't necessarily have a huge problem with this, as it will allow them to access most standard questions. Of course, these days, the concern is around the non-standard questions. When one of those pops up, pupils will likely struggle if they don't have the necessary flexible knowledge with working out exact trig values from what they already understand about trigonometry.

I was mulling this over, and a possible approach came to me. Because it literally only came to me on Wednesday, I haven't had time to trial it yet, but I will be teaching Year 10 set 2 next year, and I think I have it straight enough in my head to try it with them (hopefully this blog will help with that, and I welcome feedback).

The idea centres around motivating the drawing of these triangles by linking them back to a unit circle type definition of the two major trig functions. I will start with a type of inquiry prompt based on this triangle:

And the prompt will be, "What angle is needed, with a hypotenuse of 1, to make the vertical side equal to ½?"

I expect the pupils' first wrong suggestion will be 45˚. At least I hope it will be. Because I want to use it to motivate looking at 45˚ later on. For now, when/if it comes up, I would want to deal with this through isosceles triangles, and the triangle inequality - something along the lines of "If θ is 45˚, then the other angle will also be 45˚, which means both would have to be ½. What does that mean for the triangle?" How much of that I will tell pupils, and how much I will prompt/look for pupils to recognise I will decide in the moment.

Having dispensed with this, the problem becomes a bit more interesting. We could do a bit of calculator trialling, I haven't made up my mind yet. Whether we do or not though, and whether pupils find the result or not, I want to move to justification. The justification for this would come from reflecting the triangle in the horizontal side, giving this picture: 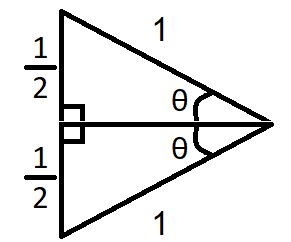 This of course leads directly to θ being 30˚ , as the triangle is an equilateral triangle.

Now of course this is very similar to the way that others would introduce the same idea. I think the difference is the focus of the approach. Previously I would have introduced this by first introducing the triangle, and using it to prompt find sine, cosine and tangent of 60˚  and 30˚ . The question of course is "why these angles?". Just because they are the ones that arise from an equilateral triangle? I think this is difficult for pupils because right-angled triangles and equilateral triangles are not well associated prior to this, particularly in the area of trigonometry. Instead, this seems a more natural question to ask - what angle makes the opposite half of the hypotenuse? It means not having to remember to draw an equilateral triangle of side 2, and then generating something useful,but rather actually drawing what you want to find, and then deducing it.

From here it would seem natural to ask about the length of the horizontal side (knowing it can't also be ½), and what that implies for the trigonometry. 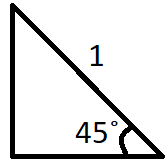 As for 0˚  and 90˚ , I honestly can't see a way of arriving at them naturally, unless we first want to explore 15˚  and 75˚ . This I can see being justifiable, to continue the pattern that 30˚ , 45˚ , 60˚  would suggest. Unfortunately, I can't see a nice way of arriving at these without at least knowing some stuff about trig for non-right triangles. However,  I think the same triangle with a hypotenuse of 1 can at least be used to give an intuitive understanding of the exact trig values for 0˚  and 90˚ .

We can ask questions like "What is going to happen to the opposite/adjacent sides as the angle gets smaller?" Pupils should be able to see that the adjacent side will get close to the same length as the hypotenuse (i.e. 1) whilst the opposite will get very small. This of course is a pre-cursor to the formal idea of limits, and this can later become the limit as θ → 0˚ . Similarly, we can then switch it around and ask "What will happen as the angle gets bigger?", the limit as θ → 90˚ . Again, pupils should be able to see that the opposite will happen, and that the opposite will get close to the hypotenuse, but the adjacent will get very small.

Like I say, I haven't tried his yet, so if anyone wants to make suggestions for how I could make this better, do this in a way to maximise success etc then please do give me a shout.
Posted by Peter Mattock at 13:25