The Power of Interpretations

Probably the most celebrated mathematics of recent years (1994 seems a long time ago now, but it really isn't) is probably Andrew Wiles proof of Fermat's Last Theorem. In fact, it seems likely that anyone will be able to say something similar to this until such time as the Riemann Hypothesis is proved. What people forget is that Wiles' proof was not actually directly of Fermat's Last Theorem. Wiles' proof was concerning two (at the time) separate branches of mathematics, elliptic curves and modular forms. The real wonder in Wiles' proof is that it suddenly showed that elliptic curves, which had been worked on in one way or another since the time of the Roman Empire were linked to modular forms, an invention only a hundred or so years old at the time. The fact that this also proved Fermat's Last Theorem was almost incidental (although it clearly was the focus of the media coverage) - for mathematicians the power was that Wiles' proof had allowed them to reinterpret problems in one area of maths as an equivalent problem in the connected area. Problems that had gone unsolved in modular forms could be reinterpreted as a problem in elliptic curves, and all the understanding from that area could be brought to bear on solving it.

I first read this story about 7 or 8 years ago in Simon Singh's book, "Fermat's Last Theorem", and it resonated with one I had heard at university as a undergrad*. Both spoke of a key message in mathematics; that often a different interpretation of a problem can drastically change our ability to solve it. Indeed, Wiles' own proof was only possible because he viewed the problem in a different way to others, and was therefore able to approach it in a way that no one else had tried to (it is worth noting it still took him 8 years!).

I think this message is as important in the mathematics classroom as in the realms of professional mathematics. Many of the different problems we ask pupils to work with in the classroom have different ways of thinking about the underlying mathematics, and if those pupils don't have flexibility in their ways of thinking about the underlying mathematics then clearly they are going to find this difficult. Consider, for example, the three questions below:

1) Cans of pop are sold in packs of 6. If Russell buys 24 cans altogether, how many packs does he buy?

2) Russell walks 24 miles in 6 hours. What is Russell's average speed?

3) The two rectangles shown below are similar. What is the scale factor of the enlargement from the smaller rectangle to the larger rectangle? 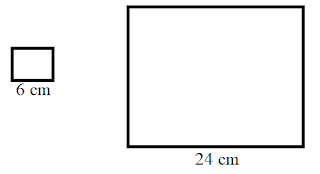 All of these problems are solved using the calculation 24 ÷ 6 but importantly the way we interpret the division is different in all three cases. The first question is a classic interpretation of division as grouping; take a dividend and create groups of a certain size (the divisor). In this case take 24 and create groups of 6. The answer to the division (the quotient) is the number of groups created. A key part of this is that the starting number and the number in each group are unit consistent - we start with 24 cans and create groups of 6 cans. However, the quotient is not in the same unit; the answer is 4 packs, not 4 cans.

My point in writing this blog is that if pupils don't understand these different interpretations of division, then they won't be able to answer all of these questions. I regularly encounter (and I am sure other teachers do as well) pupils that do not realise that the way to answer the third question is by using a division. Their concept of division is deficient and although they are capable of answering 24 ÷ 6, they are unable to see that this calculation is the one required.

Of course, I am not just talking about division here; many concepts in mathematics have multiple interpretations and the more ways of thinking about a concept pupils have the more likely they are to recognise a concept in a certain problem, and therefore be able to work towards solving it.

In my upcoming book (provisionally titled "Representations in Mathematics") I talk about different interpretations of some fundamental mathematical concepts, and how we can use representations to highlight and unite the underlying structures behind them. However, whether you choose to read my book or not I would urge all maths teachers out there to consider the following when approaching teaching new concepts:
Making the different ways of thinking about a concept clear to pupils is going to be increasingly important, not just for pupils' examinations where they will be faced with unfamiliar contexts, but also for beyond school. The evidence is now increasingly convincing that skills such as problem solving and critical thinking are domain specific skills; they depend on strong knowledge of the area to which these skills are expected to be applied. But importantly these skills still need to be developed, and for me part of this strong subject knowledge is a flexibility in interpreting the central concepts of that subject.

* The story in question also appears in the introduction to my upcoming book, so I cannot reproduce it here. I am hoping that now I have finished writing the book that I can get back to blogging more regularly again!
Posted by Peter Mattock at 14:13