Recently I have been teaching probability and I have had some thoughts about why some pupils may struggle to remember to write probabilities as fractions (or decimals/percentages in certain contexts) and then to apply ideas about probability outside of normal contexts.

The first thought I had was that we often don't distinguish between what probability is, and how we communicate that probability to other people. If we take some typical activities from early probability lessons we might well see questions or examples like these: 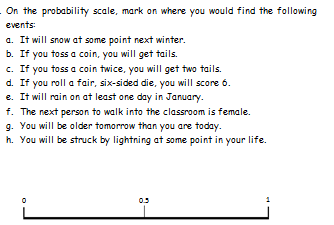 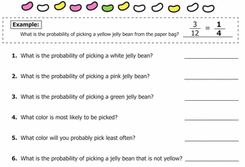 Recently in teaching probability to Year 7, I started with this: 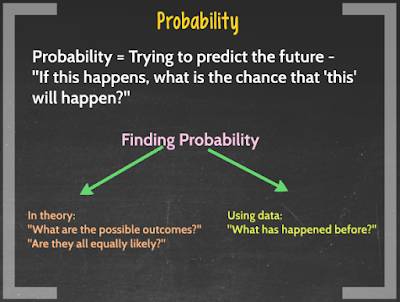 This is by no means perfect, but what I wanted my class to understand is that probability is about our attempts to predict the future. The sentence written at the top helped with a discussion about making predictions in both simple and complex contexts - in combination with the diagram at the bottom we talked about predicting the flipping of a coin, the rolling of a biased die, winning the lottery and even predicting the weather.

As part of this section of the lesson we then actually made some predictions. First of all trying to predict the result of me flipping a coin (pupils get really invested in getting this right!), then spinning the spinner below: 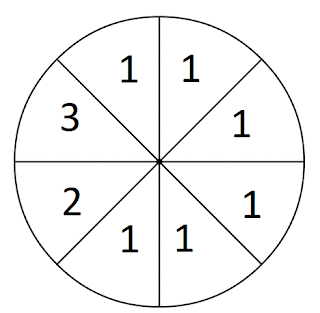 I designed a spreadsheet to simulate the spinning of this spinner, and not surprisingly those that predicted 1 a lot were right more often they not! We talked a lot about the idea of equally likely outcomes at this stage, and the idea that each section was equally likely, but because so many of them are ones this makes one the most likely outcomes. We did a similar thing with a biased dice roll - in particular I wanted to stress that although we knew all of the possible outcomes, because they weren't all equally likely we couldn't just make predictions based on what should happen in theory, we needed to gather some data about what had happened before. Again I used a spreadsheet to simulate my biased die rolling 250 times, and then we made predictions based off of the data we had gathered.

It was only at the stage that I felt the idea of predicting future outcomes was firmly linked in pupils minds with the idea of probability that I started to look at communicating that probability with them. First we just used words like "likely", "unlikely", "impossible" etc - and one of the big things I wanted to do at this stage was reinforce that prediction element again. I purposefully phrased my questions and responses to match the language I had used in the first slide; for example, I asked for each of the bags below "If I take a counter from bag ..., what is the probability that I will take a black counter?"

Reflecting on this now I think I might change this language to "If I take a counter from bag ..., TELL ME the probability that I will take a black counter." I feel this would make the point that this is communication much more clearly.

The second thought I had is related to this, and came in the next lesson on the topic. In this lesson we were writing probabilities as fractions, and I had recently used this slide with a Year 10 Foundation tier GCSE group: 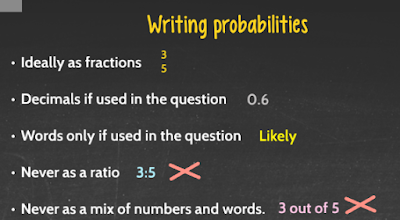 I had been considering why this was still necessary in Year 10, and came to the rather sympathetic conclusion that our teaching of probability was at least partly to blame. I reasoned that these pupils saw the act of counting the outcomes as the probability rather than just the way we communicate it. With this viewpoint either of the bottom two become perfectly acceptable - the probability is just the comparison of two counted values. I resolved when working with Year 7 to stress the difference between how we assign a value to a probability, and what that means in terms of predicting the future. I started their lesson with the use of this spinner: 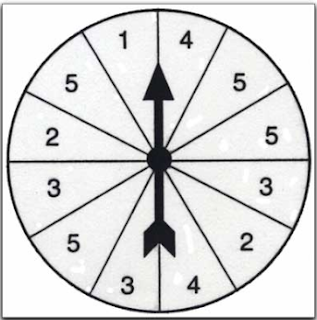 and after some useful discussion around 5 still being unlikely even though it was more likely then any other number, we looked at assigning value. I reminded pupils about the two questions from last time that would allow us to discuss probabilities in theory - "Do I know all the possible outcomes?", "Are they all equally likely?" and we decided that the answer to both was yes so we could use a theoretical approach. I chose this spinner because I wanted multiple outcomes where the fractions would simplify, so I could seek to divorce the act of the counting with the probability as a prediction of the future. There were lots of sentences like "The probability of a 5 equals four-twelfths, and that means 5 should happen about one-third of the time." The big learning point here was that the counting of the number of fives and comparing that to the number of outcomes is an approach for assigning a value to the probability, but crucially it isn't what the probability is. We are going to do some more work around this next week but I feel quietly confident that this divorcing of the approaches used to measure probability with the concept that probability is how we go about predicting future events and how we communicate the surety (or otherwise) of our predictions will pay dividends as our study of this topic continues.