Recently I have been doing quite a lot of work with proportion (one way or another) across a lot of my classes. My Year 11 classes are looking at rates of change (gradient is a proportional relationship between change in x and change in y) and probability (the proportion of outcomes that fit a criteria) respectively. My Year 8 classes are working on probability and unit conversion. My Year 10 are working on compound units. I have been realising how versatile this diagram is: 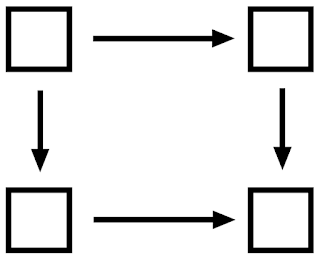 For those that don't recognise this picture, it is from N6 of the Standards Unit, which is about developing proportional reasoning. I call it 'The Standards Unit Diagram' whilst a Twitter colleague (@ProfessorSmudge) calls it a ratio table. It is probably also the best diagram I have ever seen for multiplicative comparison, which is pretty much the basis of all division and proportionality.

Lets say I want to convert between cm and metres, in particular 350 cm into metres. The diagram might look something like this: 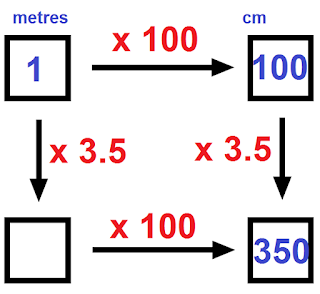 This diagram really nicely shows off the twin relationships that are present in all proportional relationships, i.e. that one variable is always a certain number of times bigger than another (the conversion factor or rate of change, in this case 100 cm/metre) and the fact that any multiple of one of the variables is matched by a corresponding scaling in the second variable (in this case, the fact that the number of cm has been multiplied by 3.5 implies that the same also happens to the number of metres). Notice that it is only strictly necessary to find one of the relationships to solve the problem, but nonetheless it is clear that two exist (in this case, depending on the level of the pupils, the focus may be on the use of 100 rather than the scaling here).

There is some anecdotal and written evidence (I remember reading an article but honestly can't remember what it was called) that most people will naturally focus on the scaling in a proportional problem, particularly if the scaling is obvious (the variable gets doubled or trebled for example), but what is nice about the diagram above is that it gives equal focus to both relationships that exist.

Below is one of the diagrams I used to highlight the commonality behind representation that was possible using this approach in my recent talk to Heads of Maths at the LaSalle Education HOM conference, sponsored by Oxford University Press. This diagram was used to solve the percentage problem "A jacket costs £84 inclusive of VAT at 20%. Work out the price before VAT." which is a fairly classic GCSE reverse percentage question. 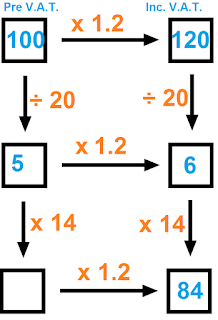 Now, as was pointed out in the session, what is clear from this diagram is that the most 'efficient' way to solve this problem is simply to divide 84 by 1.2. However the diagram does highlight a possible alternative, and more importantly highlights the commonality in the relationship here which is the essence of all proportion and division, namely "100 is to 120 as 5 is to 6 as what is to 84?"

I would argue quite strongly that very few pupils actually understand division and proportion as they don't understand that this comparison is at the heart of all of these types of relationship. Every division, every proportion are basically saying "If a is to b as c is to d then a proportion exists". The one that definitely caught the eye at the aforementioned head of maths conference was this demonstration of using the diagram to highlight the commonality of relationship when dividing with fractions, in this case solving the fractional division ¾ ÷ ⅚ 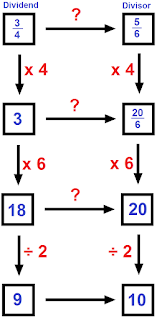 This way of viewing division as a proportional relationship, that can be manipulated in the same way as other relationships (i.e. as a multiplicative comparison) is a powerful interpretation, and one that I would argue that no pupil should be without. Even regular division of two integers can be seen in this way, particularly given the understanding that regular division is a multiplicative comparison to 1: 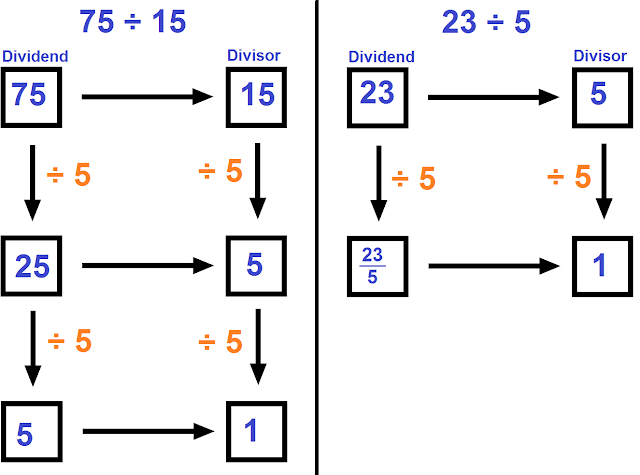 Even if you don't ultimately like the diagram or the approach, I would argue that no pupil's (or teacher's) view of proportionality or division is complete without understanding this idea of multiplicative comparison. However you choose to represent or structure it, giving your pupils an insight into this aspect of division is pretty much guaranteed to give them a deeper insight into what it it means to think multiplicatively.