As mentioned in my blog post a couple of days ago (I know, two in a week!) I have been teaching angle properties to a couple of different year groups. One misconception I kept bumping into is surrounding pictures like this: 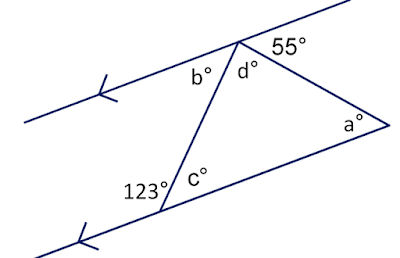 For me, it is easy to sympathise with this, as of course these angles do "lie on a straight line". I think there are a couple of issues here and have been trying to deal with both through the topic. The first is a language issue, and the second involves the diagram.

The other approach I have used alongside this is to get pupils to actually mark the point where the angles come together to form a straight line. Of course with the pupils being encouraged to look for angle properties rather than chase after particular angles (see my previous post), the conversation goes something along the lines of, "where do you see angles forming a straight line", followed by "can you mark where they form the straight line", which leads to pictures like these:

These sorts of pictures really help show why the two (or three in the case of the upper line) angles are the ones that form the straight line, and that a is not involved.

My advice would be that when teaching angle properties, consider how the language you use supports pupils in identifying angle pictures correctly, and ways in supporting pupils on securing the correct angles as part of the correct pictures.
Posted by Peter Mattock at 13:38